Will Moscow ever stop growing? 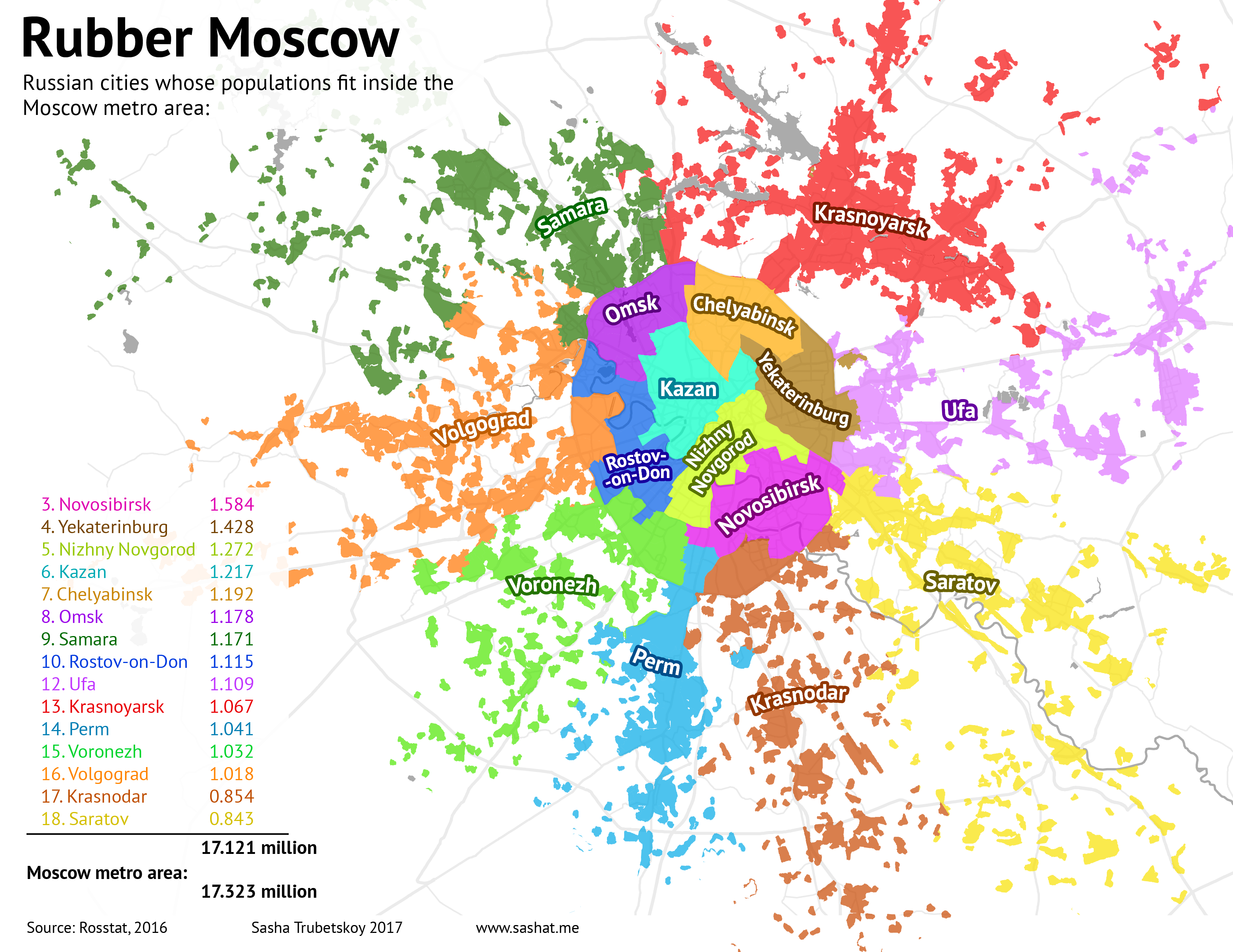 Even as Russia struggles to grow its population, Moscow’s incredible growth seems unstoppable. Excluding St. Petersburg, Russia’s next 15 largest cities combined could comfortably fit inside Moscow and its suburbs.

In a recent map, I looked at the growth and decline of post-Soviet cities. Across the entire post-Soviet space, there is one overwhelming winner – Moscow. For hundreds of years, the city had a stable population of about 200,000 people. As Russia industrialized, the city ballooned, growing to a million people by 1900. The turmoil of two world wars, a revolution, a civil war and a purge slowed growth temporarily, but by 1950 Moscow was back at it with 2 million people. Since then, the city has steadily gained 1.5 million people every decade, and shows no signs of slowing down.

The official city of Moscow now has 12.3 million people, but the metro area’s population is 17.3 million when you include the suburbs.

So how big is Moscow compared to other Russian cities? The number-two city, St. Petersburg, has upwards of 5 million people—less than half of Moscow’s total. But the real story is when you go past St. Pete, and look at Russia’s third- and fourth-place cities. Novosibirsk, Russia’s third-largest city and the “Capital of Siberia”, has a population of only 1.5 million—eight times smaller than Moscow! Compare this to the United States, where Chicago is only 2.5 times smaller than New York.

I decided to just see how far down the list I could go, stuffing these cities into Moscow by population, until I ran out of room. If we include St. Petersburg, then we can fit the next 10 cities into Moscow: St. Pete, Novosibirsk, Yekaterinburg, etc.–all the way through number 11, Ufa. But St. Petersburg has its own special history, similar to Moscow. Its position of privilege during Imperial and Soviet times, first as the gleaming Western capital, and later as a cultural and scientific center, is what gave it a population boost over the remaining “provincial” cities.

If we skip St. Petersburg, the numbers are astounding. 15 of Russia’s biggest cities, Novosibirsk through Saratov, fit inside the Moscow area—with 200,000 people to spare. This is the legacy of Soviet-era egalitarian snobbery that positioned Moscow as more equal than the other Soviet cities. The crisis of the 1990s didn’t help, as millions of Russians were plunged into poverty and sought any means of making a living, even if it meant abandoning their ancestral towns and moving to Moscow.

The situation in Russia is not nearly as dire as it was 20 years ago, and indeed Moscow’s boom has slowed somewhat. Other cities, like high-tech Novosibirsk or oil-rich Kazan, have been showing growth. But the reality remains: if you are a young, educated, creative professional in Russia, you basically have no choice—it’s Moscow or Bust. If you don’t move to the West, that is.

On the one hand, it’s great that Russia has a world-class city like Moscow to show the world. But on the other hand, a nation’s prosperity comes from the strength of its average communities, and Moscow is decidedly not average. Russia will truly prosper when bureaucratic competence and civic engagement permeate the smaller towns and cities, rather than being limited to Moscow and St. Petersburg.