Thanks to regional rivalries, the UN Security Council will probably never add more permanent members. Brazil is the largest Latin American country and a logical choice for a new addition, being top 10 in area, population, GDP and UN funding. 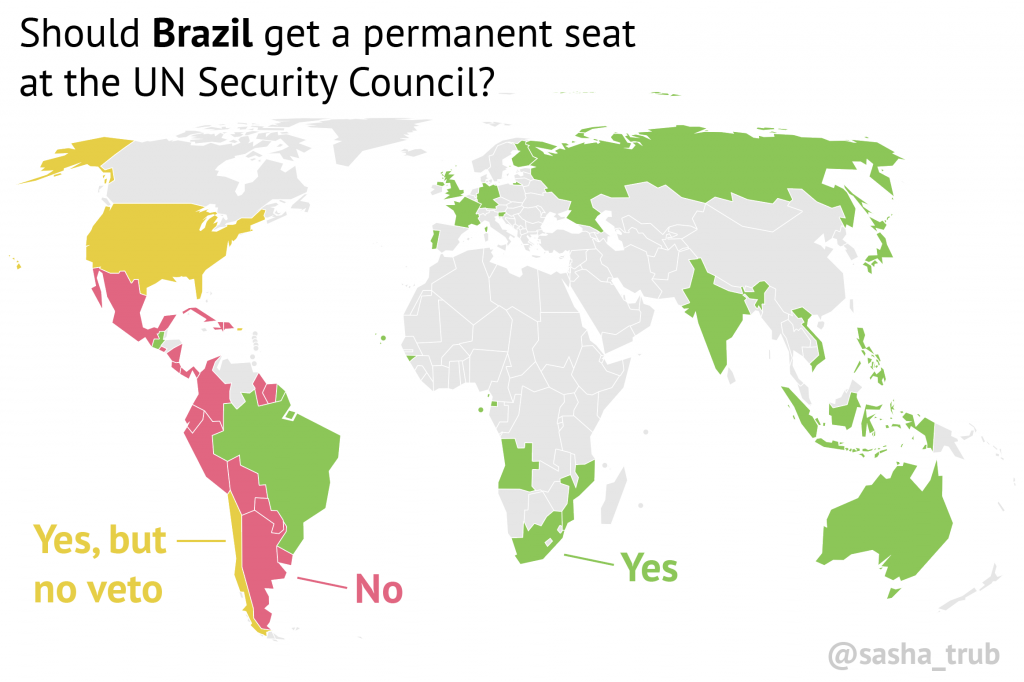 But Brazil speaks Portuguese, not Spanish. This annoys Mexico, who see themselves as the leading Spanish-speaking Latin country. Brazil also has some trade disputes with neighbors Argentina and Colombia, giving them yet more reasons to oppose. 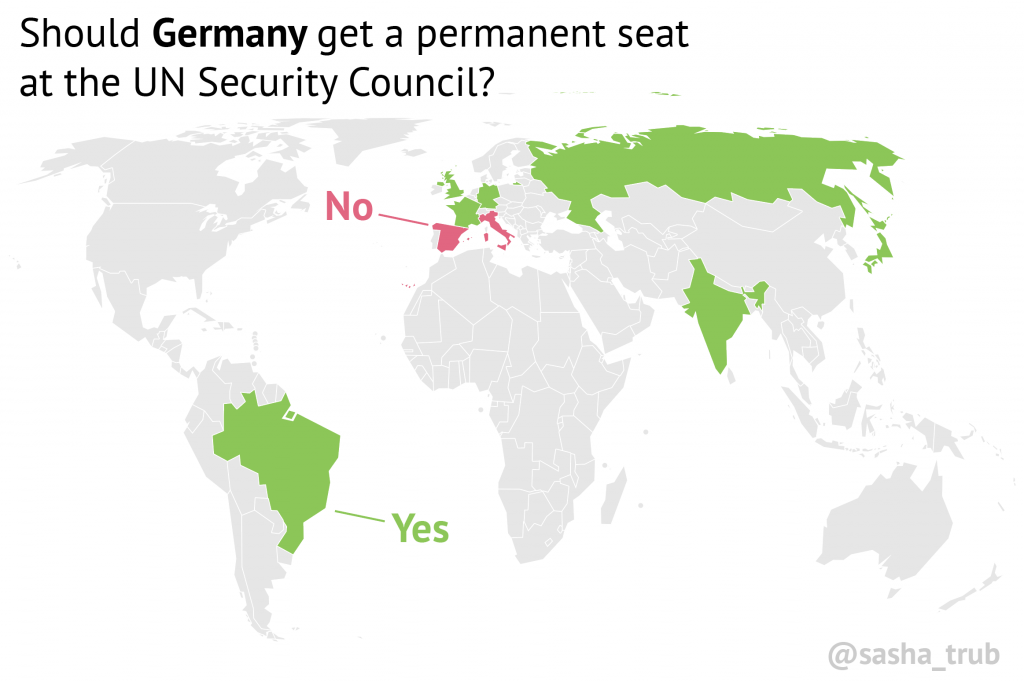 The German delegation is well aware that if they got a permanent seat, Western Europe would be greatly over-represented in the Council. So they essentially are only willing to get a seat if Brazil, India and Japan also get seats to balance it out.

France and Britain have no problem with a German p-seat, since they still have veto power and Germany is an ally. Italy and Spain, however, fear losing even more power to their northern neighbors.

Incidentally, Russia is also fine with a German p-seat. Germany is generally more willing to work with Russia, compared to France or the UK. They also buy a lot of Russian gas.

Japan, like Brazil, is a top-10 country in terms of GDP, population and UN funding. The funding aspect is their strongest case, since Japan contributes nearly 10% of the UN’s budget (second only to the US), but doesn’t get veto power. 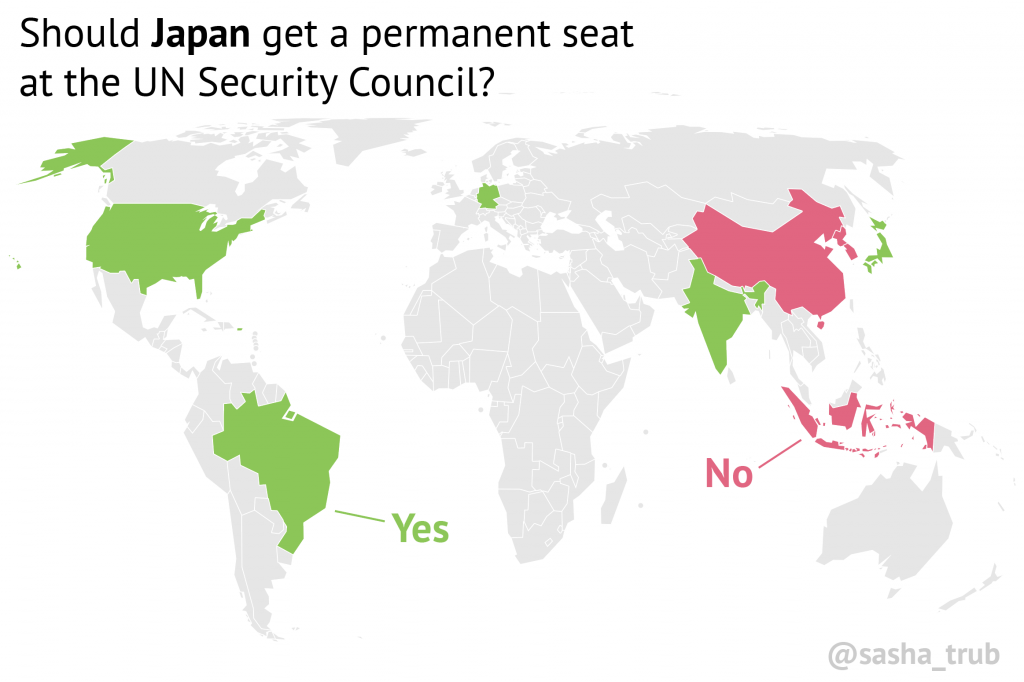 Geopolitically, the Japanese bid is about countering China, which the US is happy to support. But South Korea strongly opposes, partly for historical reasons, but also because a Japanese p-seat would officially acknowledge that South Korea is just not as important.

Indonesia said they were “not ready” to support the Japanese bid. Yes, adding Japan would mean giving up influence to a rival. But more objectively, Indonesia is far larger. As its economy inevitably overtakes Japan, a Japanese p-seat would look increasingly arbitrary.

Finally, we have India — the most logical and most widely supported permanent bid. More people than any continent except Asia, and soon to be the world’s 3rd largest economy. Not to mention a nuclear state and top contributor of UN army manpower, which is important to the UNSC. 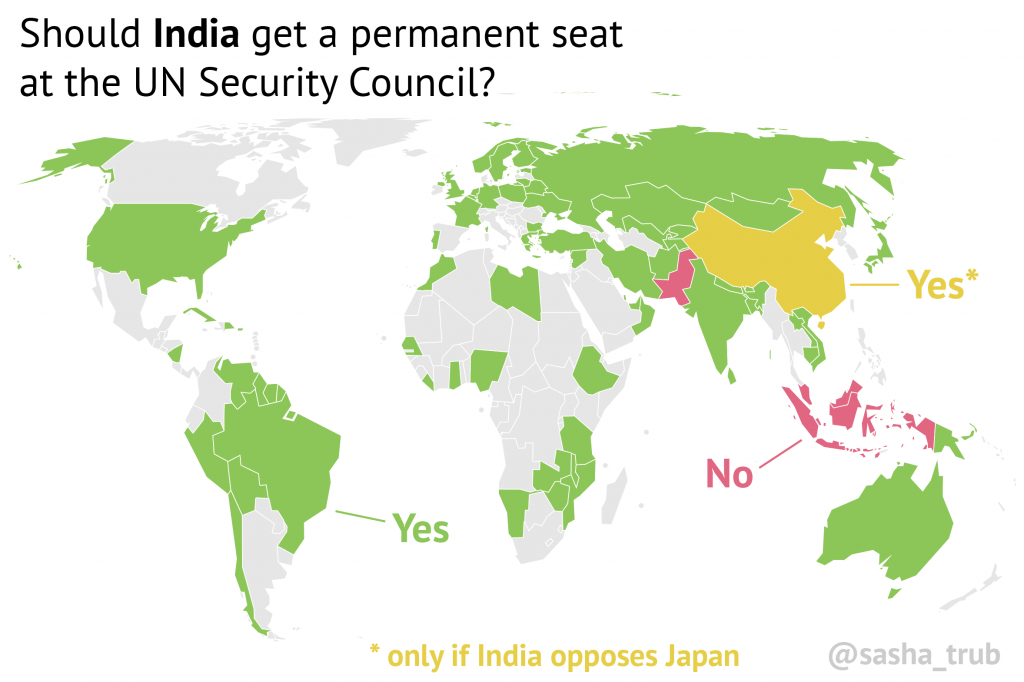 Needless to say, Pakistan “firmly opposes” an Indian permanent seat. Indonesia has not made an official statement but is essentially opposed, as India is a main rival. Malaysia would rather support Indonesia than India.

But here is the curious thing — technically India only needs the P5 countries to agree, since without a veto it could easily get a majority. So it’s entirely up to China, who have played an interesting gambit:

China will support a permanent Indian seat only if India opposes a Japanese permanent seat!

China would rather sacrifice leverage against India to prevent Japan from breaking a Chinese sphere of influence in East Asia. But if India opposes Japan, they might lose the support of the US, who are reluctant in the first place.

So nothing’s gonna happen for the time being.