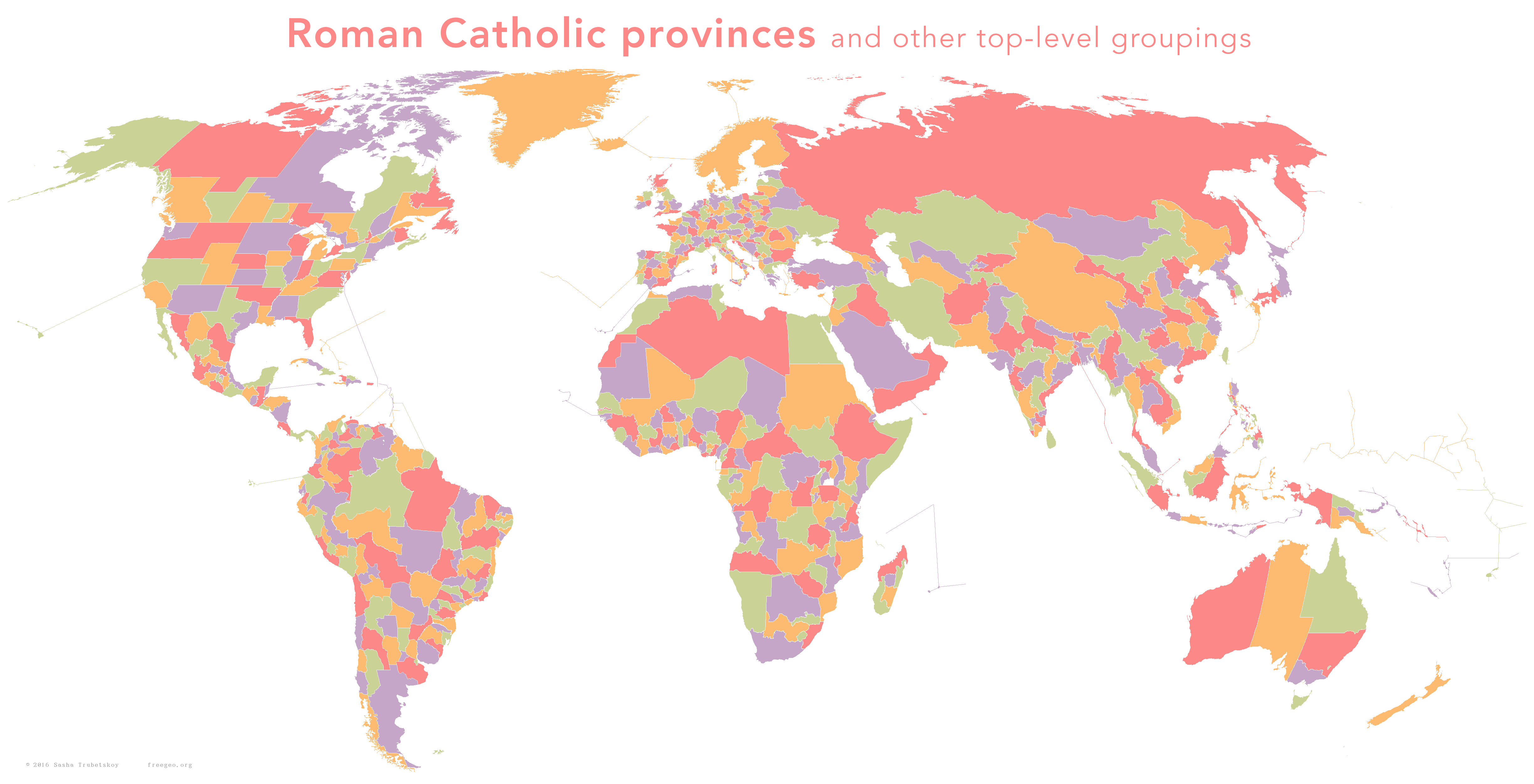 Originally I didn’t think much of this project, though it was nice to see how the provinces looked. It turned out, however, that my map was the only one out there, in terms of mapping out the church provinces. Molly Burhans, the GoodLand Project director, reached out to me asking for my shapefiles.

I replied that I had no shapefiles—I made the first map entirely by hand. But having recently gotten into GIS, I offered to make them. This turned out to be a more grueling ordeal than I had anticipated, but I was able to completely remake the map from scratch, this time with real shapefiles.

Anyway, I made a bunch of fixes to stuff that I had messed up in the last map. Here’s the original post, with a bunch of FAQ based on the reddit thread from last year:

Originally, the administrative divisions of the Roman Catholic Church centered around the borders of the Roman Empire’s provinces. But even after the fall of Rome 1500 years ago, the Church kept its diocese boundaries at the Ancient Roman lines as a matter of convenience amidst Europe’s turbulent politics. The Church’s expansion into the New World meant that dozens of new provinces were created, in the spirit of their ancient counterparts. With the rapid growth of Catholicism in Africa and Asia during the latter part of the 20th century, these administrative divisions multiplied in those regions as well.

Today, nearly every corner of the globe has been incorporated into the Catholic administration. Interestingly, every subdivision can be thought of as a continuation of the Roman Empire’s province system. These provinces are one of the few modern institutions that survive as direct relics of Ancient Rome.

Yes, the number of Catholics in Russia is very small. The Russian Orthodox Church is Russia’s church historically, and the vast majority of Christian Russians are Orthodox. Catholicism has somewhat of a bad reputation in Russia as well, associated with Western decadence and corruption, not to mention attempted Polish, Teutonic and Swedish subjugations.

Rhode Island is actually included with Connecticut in a combined province. I think the rest of New England is all one province simply because historically the populations of the two would be almost equal. Nowadays it’s something like 4.5 million for the Province of Hartford (CT+RI) and 9.9 million for Boston Province (rest of NE).

North Korea does not have a government that is highly favorable towards, or tolerant of religion (besides their Juche ideology). Stuck in an administrative limbo, North Korea was placed under the jurisdiction of the Archdiocese of Seoul, even though there are no functioning Catholic churches in North Korea.

The little enclave (green) is the Territorial Abbey of Tokugen (aka Tokwon), which ceased to function after Christians were driven out in 1949. However, the administrative unit continues to exist and is still directly under the jurisdiction of the Vatican, making it a top-level unit.

As in Italy, Romania and Turkey, the Church’s boundaries reveal centuries-old political and cultural influences. However, many countries like France and Spain amended the church’s borders to correspond to modern political subdivisions. So in that sense it’s a break from tradition there.

Texas has a huge population, with a sharp rise in Hispanic Catholics due to recent immigration. They had to split it in half somehow, and it looks like they did some arbitrary split by county. Texas was divided relatively recently, in 2004.

Melkite, Maronite, Ukrainian, etc. Catholic churches do have their own divisions, which are unrelated to the Roman Catholic ones and overlap. I did not include those on the map, for the sake of simplicity. So yes, this map is only the Latin church.

I’m not Roman Catholic myself (actually Orthodox), but essentially each physical church building has a parish. Many parishes together make a diocese, which is headed by a bishop.

Dioceses are grouped into ecclesiastical provinces. One of the dioceses in the province is selected to be the archdiocese, to which the rest of the province’s dioceses are suffragan (subordinate).

I’m not entirely sure what types of decisions bishops and archbishops would make. My guess is that it mostly has to do with ordaining new priests. Additionally, things like record- or bookkeeping are done by a dedicated staff based on these administrative divisions.

Going off of the stereotype of how centralized the Catholic church is, I imagine that these divisions are pretty significant in terms of internal Church politics and accounting. The Orthodox have a similar hierarchical setup, but as far as I know the Orthodox church is not as centralized, and things are still largely done on a very local level.

The dioceses of Gaborone and Francistown are under Pretoria. I think the region is mostly Protestant so it would make sense that there aren’t many Catholics. Plus for many years Botswana and South Africa essentially had one government, I wouldn’t be surprised if this division were a relic of that.