The US-Mexico border is the most frequently crossed, and one of the longest, in the world. The difference in development between the Mexican and US side is perhaps the greatest of any international border. This results in a really interesting urban pileup effect where many Mexicans move to cities that are right along the US border. There are 14 major (15,000+) cross-border cities and towns. Except for San Diego-Tijuana, all of them have a significantly higher population on the Mexican side of the border. I lined up all the cities, from San Diego-Tijuana in the west to Brownsville-Matamoros in the east, and put them on a single map to scale (click to enlarge):

The urban pileup is clearly visible, especially in Baja California and Sonora. The cities in Texas look much more evenly developed, but this is an illusion. The US cities are very spread-out, while their Mexican counterparts are much more tightly packed. Even in Texas, the US cities are heavily outweighed by their Mexican sister cities. Economically, these Mexican cities are fast-growing and rely on trade with the United States. Their US sisters, meanwhile, grow from Mexican immigration – but do not attract much attention from other parts of the United States (except San Diego, and possibly El Paso).

The dates for these population estimates range from 2010 to 2016. Keep in mind that not only does the population change very quickly, but also it is hard to measure the so-called “floating population” of migrants. For example, the Brownsville-Matamoros area is home to over 1.3 million people at any one time, but only about 940,000 are official residents. 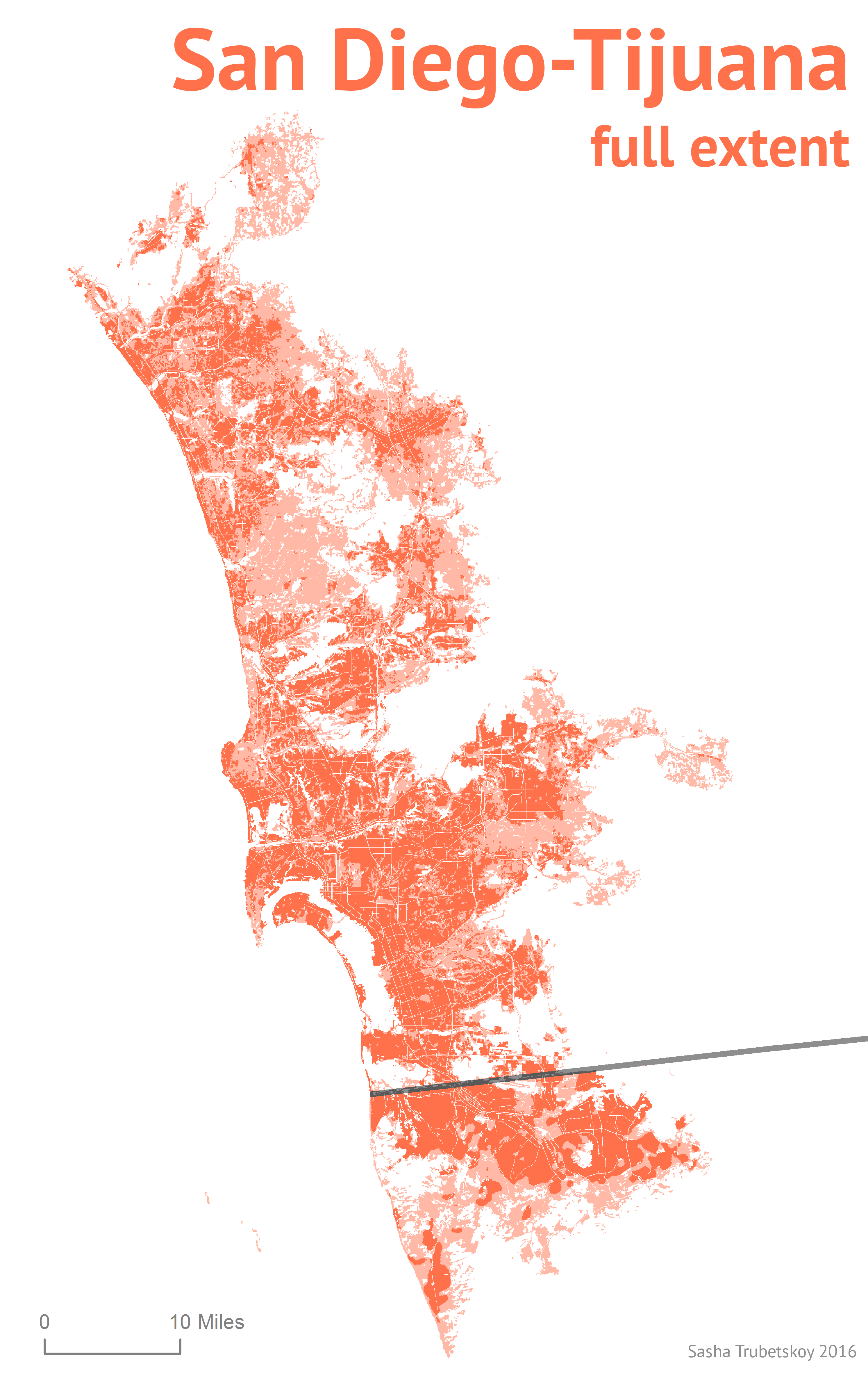 For those interested, the rest of this post will talk more about the urban pileup effect in Mexico and other countries.

I’ve spent many weekend afternoons browsing through Google Earth and other satellite image apps. One of the things that always struck me was the US-Mexico border, in many cases literally a line in the sand. Several Mexican towns, and even cities upwards of a million people, seem piled right up against the dividing line—it’s as if these people were scrambling for a chance to live as close as possible to the United States.

The twin cities of Mexicali and Calexico are my archetypal example of the urban pileup effect. The border is clearly visible.

Of course, the real story is not that simple, but there is some truth to my casual intuition. The border between Mexico and the United States represents the greatest divide in development between two neighboring countries anywhere in the world, going by inequality-adjusted HDI. Looking at this HDI data, we can formulate a basic hypothesis: that urban pileups occur along a less-developed country’s border with a significantly more developed country. To test this, we can look at borders around the world.

Looking at this inequality-adjusted HDI map, Mexico and the US certainly stand out. But another interesting country is Argentina, where it borders Bolivia, Paraguay and perhaps Brazil. Let’s take a look at towns on the Argentina-Bolivia border. This line crosses the barren Altiplano and remote Yungas tropical forests. Nonetheless, a quick look at Google Maps confirms that where there is settlement, the Bolivian side is always more populated:

Argentina’s border with Paraguay crosses the sparsely-settled Gran Chaco plain. The picture here is much less clear. Asuncion, Paraguay’s capital, lies practically on the Argentine border, with little settlement on the opposite side – a win for the hypothesis. However, Argentina’s Formosa and Posadas, the only other towns on the border, are roughly equal with their Paraguayan sister cities. Is this a blow to our thinking? These data show that Argentina’s border provinces with Paraguay are among that nation’s least developed. My conclusion is that the development gradient here is not strong enough to warrant a pileup effect, not to mention the very sparse population of the region. The same thing goes for Argentina’s border with Brazil – while Argentina’s far north is relatively underdeveloped, Brazil’s south is disproportionately well-off. Together these effects cancel out and we see very little pileup effect.

Besides Argentina, there are no other large-scale examples of disparity in development across national borders. Iran’s border with Azerbaijan is mostly mountainous and inaccessible, but we do see small pileup effects with the cities of Astara and Parsabad. Otherwise:

There are only two other places in the world with a sufficient development gradient for a pileup effect: between Johor Bahru, Malaysia and Singapore; and between Shenzhen and Hong Kong, China. Both areas spent many decades as British colonies, which gave the city-states a disproportionate amount of connections to the Western economy. These connections served as conduits, delivering know-how and investment from the West which would jump-start both cities’ “tiger economies”. Singapore and Hong Kong prospered, while the Chinese and Malay mainlands were much slower to develop. Over time this led to a very clear urban pileup at the borders: 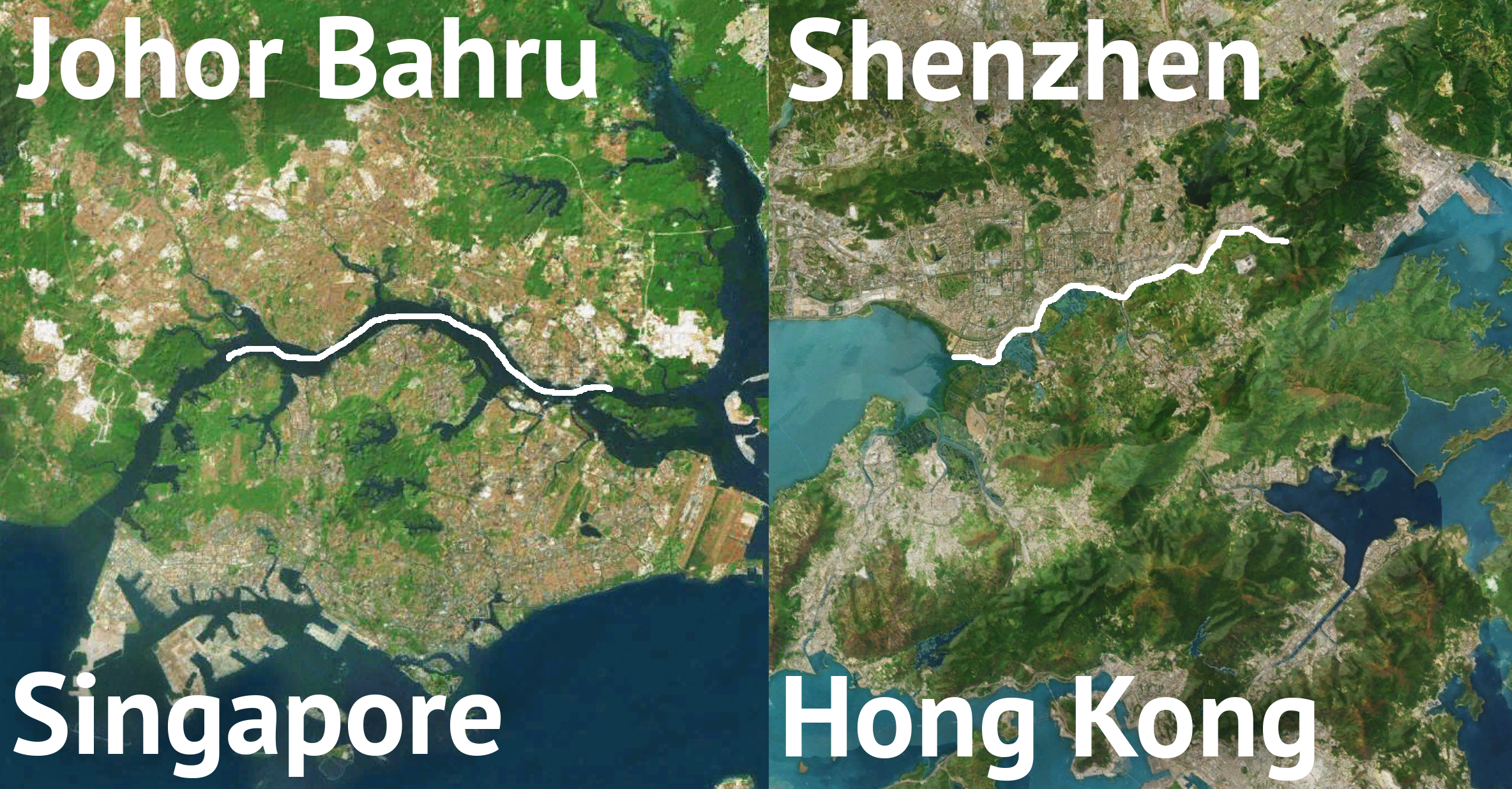 The cities of Johor and Shenzhen owe their existence to the greater metropolises of Singapore and Hong Kong.

Note how the parent city has its city center away from the border, since it developed independently. The younger child city, meanwhile, has its core practically straddling the border. Shenzhen in particular went from a rural backwater to one of China’s most modern cities in literally a decade, when travel became easier in the 1990s.

These pileups are largely a new phenomenon, owing to the development of rapid transportation and easily scalable housing. Both of these factors allow entire cities to emerge very rapidly and to shift entire economies. Whether we will see more urban pileups is uncertain. Inequality between the United States and Mexico is gradually shrinking; the flow of migration has already reversed. Africa presents the most opportunity for the growth of transnational regions. Nigeria is set to be Africa’s next great power, but it does not have any densely-populated neighbors that are significantly poorer. Kenya is perhaps a better example. If the country’s relative stability and prosperity continues, we can expect border communities to emerge in neighboring Somalia, Uganda and Ethiopia. One such town, Moyale, is already emerging on the Ethiopian border. Only time will tell.

For the big map, land use data came courtesy of MDAUS with their BaseVue 2013 dataset.

Roads were taken from OpenStreetMap.