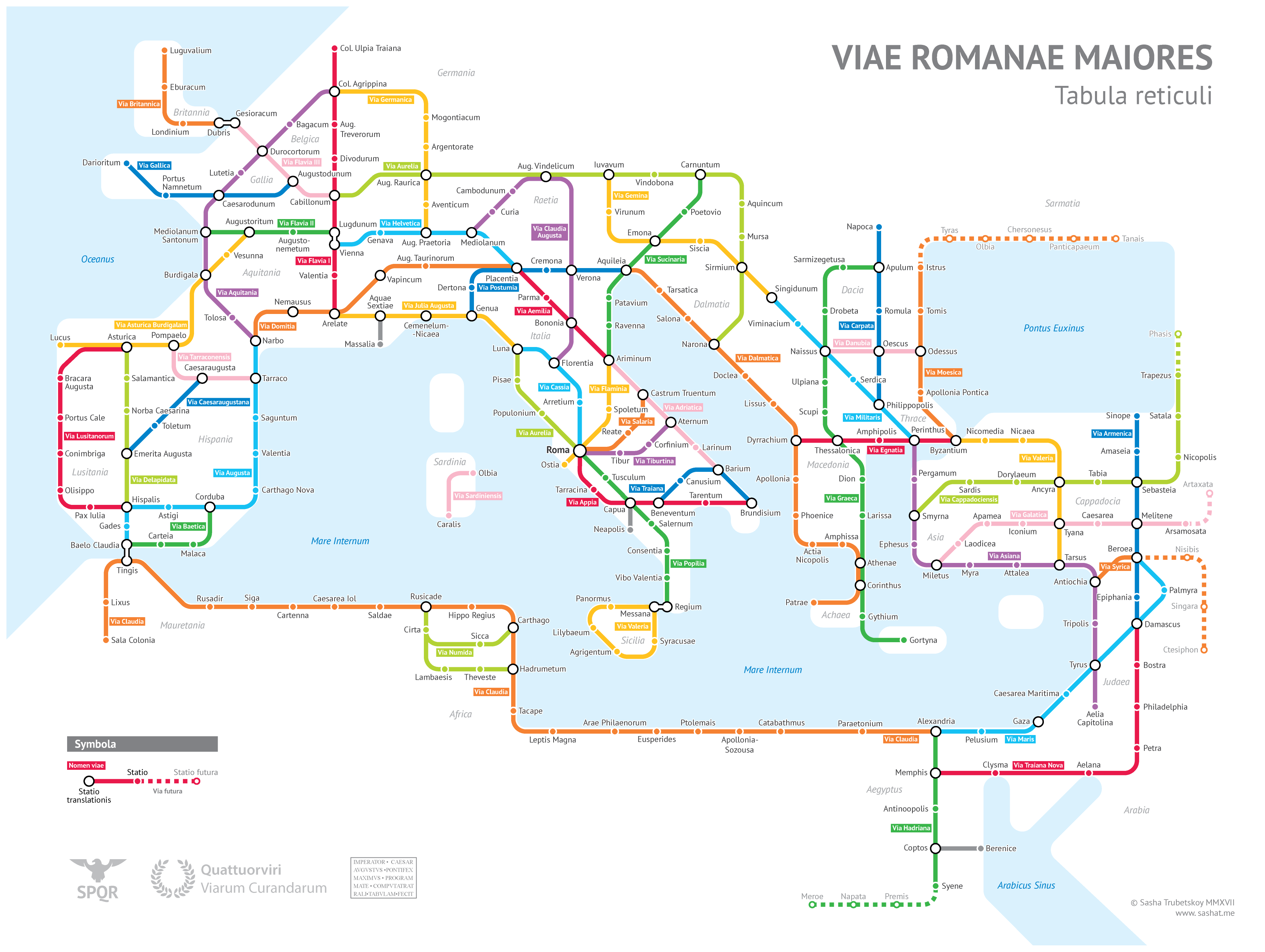 It’s finally done. A subway-style diagram of the major Roman roads, based on the Empire of ca. 125 AD.

Creating this required far more research than I had expected—there is not a single consistent source that was particularly good for this. Huge shoutout to: Stanford’s ORBIS model, The Pelagios Project, and the Antonine Itinerary (found a full PDF online but lost the url).

The lines are a combination of actual, named roads (like the Via Appia or Via Militaris) as well as roads that do not have a known historic name (in which case I creatively invented some names). Skip to the “Creative liberties taken” section for specifics.

How long would it actually take to travel this network? That depends a lot on what method of transport you are using, which depends on how much money you have. Another big factor is the season – each time of year poses its own challenges. In the summer, it would take you about two months to walk on foot from Rome to Byzantium. If you had a horse, it would only take you a month.

However, no sane Roman would use only roads where sea travel is available. Sailing was much cheaper and faster – a combination of horse and sailboat would get you from Rome to Byzantium in about 25 days, Rome to Carthage in 4-5 days. Check out ORBIS if you want to play around with a “Google Maps” for Ancient Rome. I decided not to include maritime routes on the map for simplicity’s sake.

The biggest creative element was choosing which roads and cities to include, and which to exclude. There is no way I could include every Roman road, these are only the main ones. I tried to include cities with larger populations, or cities that were provincial capitals around the 2nd century.

Obviously to travel from Petra to Gaza you would take a more or less direct road, rather than going to Damascus and “transferring” to the Via Maris. The way we travel on roads is very different from rail, which is a slight flaw in the concept of the map. But I think it’s still aesthetically pleasing and informative.

Here’s a list of the roads that have authentic names and paths:

Some roads have real names but were modified somewhat:

The other roads have relatively uncreative names that I invented, usually based on a place that they pass through. I have never formally studied Latin and I’ll admit that I am somewhat confused by the distinction between -a and -ensis endings, so there’s a chance I may have messed that up.

I got numerous comments following the release of my Roman roads map. Acting by the mantra of “OP delivers”, I decided to take this feedback into account and create an updated version of the map. The new map is featured here, and I have also replaced the map in the original post with the new version.

Several changes were made: