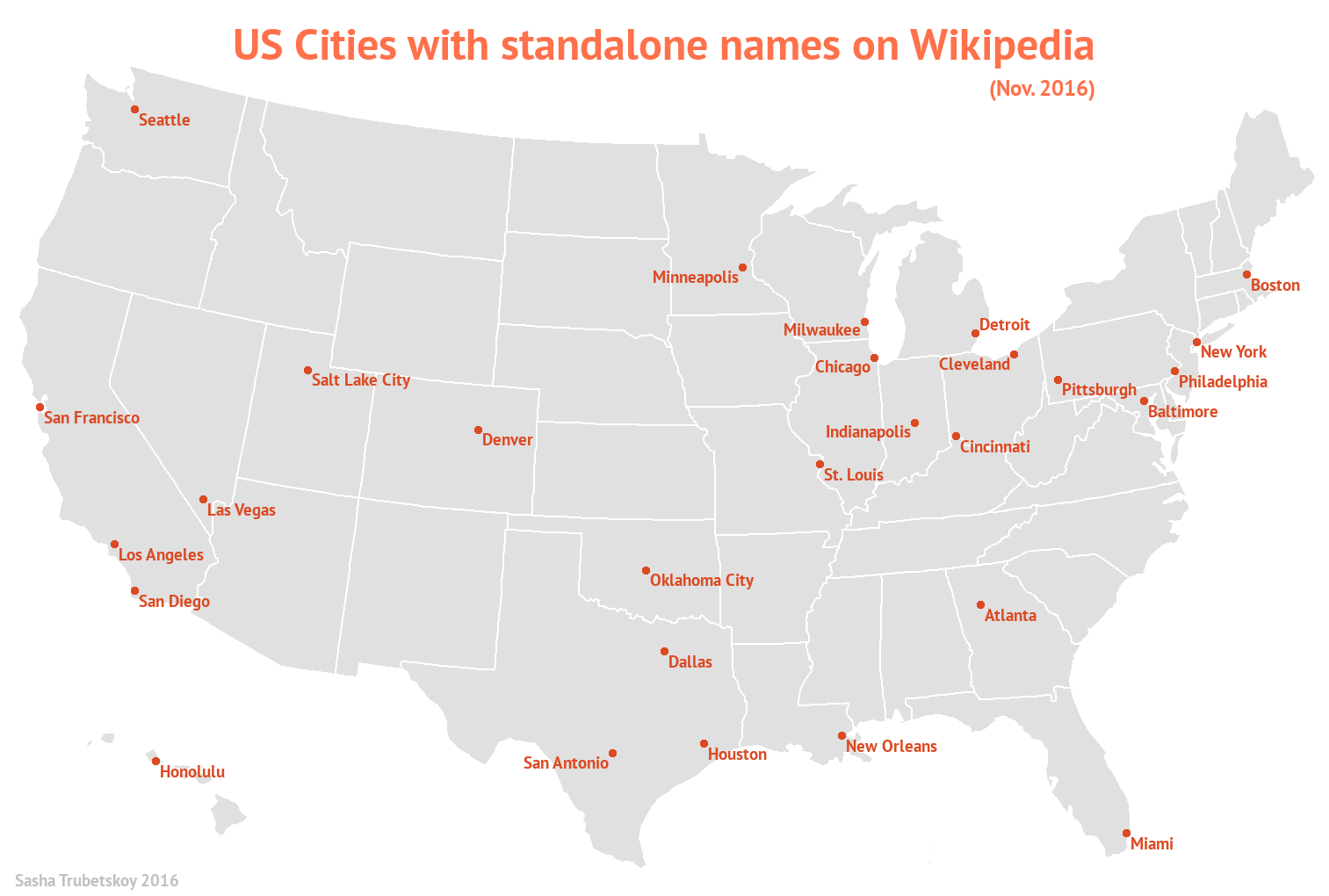 Recently I had a random thought: why is it that some city articles on Wikipedia are called, for example, Nashville, Tennessee – while others are simply, Seattle or Dallas? Is Nashville simply not culturally significant enough to stand on its own, without the cumbersome state identifier?

Wikipedia has extensive policy about the article names for geographical locations, among other things. And for every page of official policy, there are several pages of discussion. But when I went down Wikipedia’s political rabbit hole, I couldn’t find a clear answer on why some cities needed a state label, while others seemed to do fine without one. Ultimately it all seems to come down to “widely accepted usage”. And wherever there’s a grey area like that, looking at a relevant map can bring some insight and shed light on previously unseen patterns.

Well, here’s the map. Nothing particularly fascinating, but a few interesting things to note.

What big cities are lacking? The largest city proper without a standalone name is Phoenix, Arizona. This is due to the fact that “Phoenix” on its own refers to the mythical creature. Fair enough. Further down the list of largest US cities we see San Jose (article title: San Jose, California), which makes sense – there’s San José, Costa Rica, among other places. On the other hand, Austin, Texas came as a surprise to me. There is no other large city in the world called Austin, and I’ve never heard the term “Austin” refer to anything but the city – including Stephen F. Austin himself. The city is certainly a newcomer on America’s cultural stage. But I would say that it’s just as relevant nowadays as a place like Cincinnati or San Antonio. Wikipedia’s a democracy – determined Austinites could unite, and change the article title!

Speaking of Texas, San Antonio – and, for that matter, San Diego – surprised me. Certainly they’re important cities, but I expected there to be some similarly named city in a Spanish-speaking country that would cause conflict, à la San Jose. I guess not.

This is one of the few maps where Baltimore is shown in favor of Washington, DC. “Washington” being an ambiguous term, I can see why Wikipedia sticks to Washington, D.C. for its official article title. This brings me back to a 7th grade US history quiz, where I got the capital of the United States wrong. Born and raised in the DC area, I had clearly and proudly written Washington! Now, Mr. Thomas was a fantastic teacher and overall one of the chillest people I have ever met. He was the epitome of a former California surfer dude – West Coast born and bred. So when he read “Washington,” his first thought was Washington State. He marked my answer wrong, writing “D.C.” in fat purple marker. Lesson learned. Even for seemingly mundane things, people’s backgrounds matter.

Other major cities forced to bear their full state name:

For most of these places, it’s probably a matter of a couple decades before they, too, can be like the older US cities and not have to live on the crutch of their state’s name.