Russian and Ukrainian losses in the war since February are hard to track, as both sides are not particularly eager to share the numbers.

The absence of reliable information leads to a vacuum that is filled with propaganda, speculation, hysteria and other bad information.

However, it’s still possible to get decent estimates of the losses.

Let’s start with the Russian side. By my estimation, as of December 15, 2022, about 17,500 Russian and allied troops have been killed in Ukraine.

How did I arrive at these numbers?

I’ve plotted estimates of Russian military deaths from all sources in one chart: 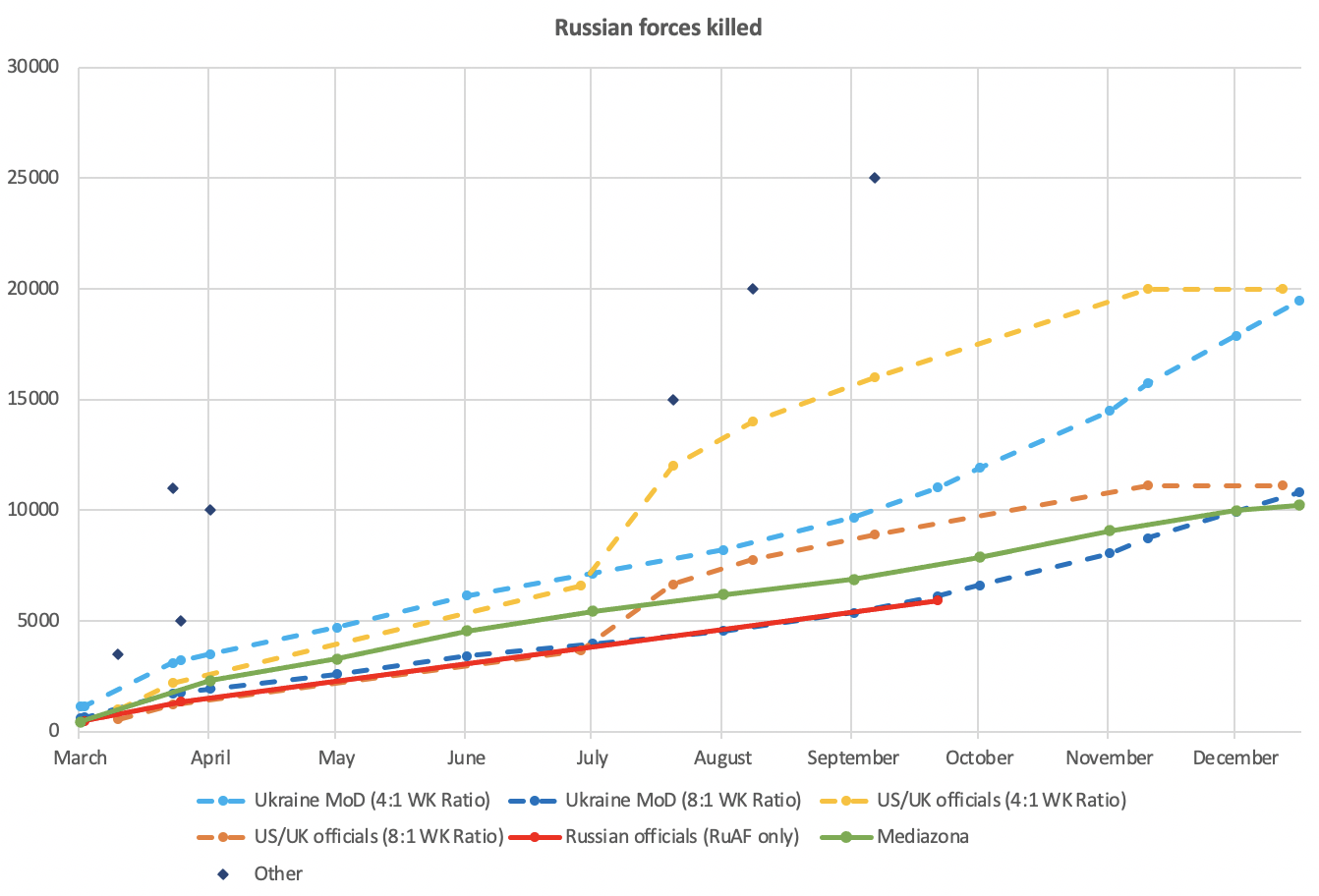 LNR deaths were estimated in November to be over 1,000 by BBC/Mediazona. This is a reliable source (as discussed below) and matches very roughly with the DNR number above – the LNR has about half the population of the DNR, but at the same time the DNR has a much longer front line with Ukraine, and DNR forces took part much more actively in fighting (based on Russian Telegram reports).

So overall, both these figures seem reasonable.

I am not including them on the chart, but use them in calculations.

The red line represents official death figures from the Russian Ministry of Defense. So far, there have only three such statements – two in March, and one in September.

While it may be in Russia’s interest to conceal or minimize casualties, I would consider these numbers to be generally reliable, if properly understood: they refer to fallen members of the Russian Armed Forces – army, navy, air force, and other branches. They do not include: the Russian National Guard (Rosgvardia), the Donetsk and Lugansk militias, mercenaries such as Wagner Group, and other Russian government agencies like the FSB or Border Guards.

These other groups make up a significant part of the Russian force fighting in Ukraine, and explain much of the gap between the official Russian figures and Western/Ukrainian casualty estimates.

So, surprisingly, Defense Minister Sergey Shoygu’s figure of 5,937 Russian Armed Forces deaths as of September 21 is in line with Ukrainian figures, as I will show below.

Mediazona is an independent Russian news outlet founded by members of Pussy Riot. “Working with BBC News Russian service and a team of volunteers,” they “ collect data about the casualties sustained by the Russian military in Ukraine” via “publicly available reports including social media posts by relatives, reports in local media, and statements by the local authorities.”

As of December 16, 2022, they’ve identified 10,229 individual Russian fighters who have died since February. This includes Russians in the regular military, as well as other services or mercenary groups. It may also include some Russians who volunteered to fight in the L/DNR militias.

The publication stresses that “the real death toll is much higher,” since they are only gathering what is publicly available. I want to spend some time addressing this claim, since to me, the evidence for this is not clear.

Yes, there are deaths that won’t be seen on gravestones, news articles and social media. But not as many as one may expect. We can estimate how many dead soldiers are missing by looking at the upward revisions in Mediazona’s estimates. For example, in July, they identified 1,436 men who died in the first month of the war. But by August, that estimate had grown to 1,567 men, as new evidence was found. This “revision rate” averages +3% per month, trailing off at around 10 months. This means Mediazona’s final estimate typically ends up being about 1.03^10 or 34% higher than their first estimate. So if Mediazona now claims 10,229 fighters dead, we take the first 2,000 or so and assume that count has basically tapered off, then take the remaining 8,000 and multiply by our compounded revision rate of 1.34. In the end, we get 12,700 killed so far – only a couple thousand more than the current estimate.

These are very rough calculations, but the point is to show that there aren’t thousands of unaccounted-for deaths that we will never hear about. The government can delay news of a man’s death for some months, but not forever. Indeed, in today’s conditions, the only way a dead soldier could completely “fall through the cracks” is if he had no family and lived in a remote town where there were no volunteers to record his gravestone.

So the number of “missing” casualties using this method seems to be, at most, a few thousand. Meanwhile, because the methodology used by the BBC/Mediazona analysts is not clearly specified, we don’t know how cleanly they are counting these deaths. Are they including accidental deaths unrelated to combat, soldier suicides, and deaths from natural causes? In the US military each year, about 400 active-duty soldiers die in accidents, 500 commit suicide, another 300 of natural causes, and 50 or so are murdered, for a total of 1000 non-combat related deaths per year; the Russian numbers are probably similar or worse. The BBC is an arm of the British government, which is currently against Russia in this war. It’s quite possible they are erring on the side of overcounting.

Ironically, Mediazona’s estimates pretty much confirm Sergey Shoygu’s figure from September 21. Shoygu’s 6,000 or so regular Russian soldiers dead, plus another 1,500 mercenaries and other irregular forces, get us right around Mediazona’s count of 7,500 for September 21.

So the Mediazona number provides a very solid estimate for the number killed, though it is probably missing 1,000–2,000 recent deaths from the Russian Federation, and does not include L/DNR deaths, which are significant.

The Ukrainian Defense Ministry publish near-daily estimates of what they call Russian “losses”, “eliminated” or “liquidated”. I think these terms are deliberately ambiguous – many news sources and ordinary people take this as an estimate of Russian deaths. But the Kyiv Independent is more careful, always using the word “losses” when citing the Ukrainian MoD.

Yes, in Stalin’s times, to “liquidate” someone meant to kill them, but in more modern military-speak, ликвидировать is more like “neutralize”. In fact, Ukraine’s Defense Ministry has recently been switching to saying “eliminated” rather than “liquidated” in its English-language media.

As of December 16, they reckoned Russian “combat losses” at just under 97,000 men “eliminated”.

The Ukrainian military’s deliberately ambiguous language is a hint that their published numbers probably include wounded as well as dead. Another hint is the fact that not even “anonymous US officials” are claiming 100,000 Russian troops killed.

But here’s the biggest hint that the Ukrainian figures include wounded – if we take the 97,000 figure, and assume an 8:1 ratio of wounded-to-killed, we get the bottom blue line on the chart. It lines up with almost perfectly with the Russian government’s official statement, and not too far from the open source estimate by Mediazona.

We are, of course, assuming an 8:1 wounded-to-killed ratio, which is debatable. Below is a table by Christopher A. Lawrence showing ratios for US forces:

We can see ratios of about 3:1 in the World Wars, and much higher ratios for Iraq and Afghanistan. These are huge generalizations – US deaths were much higher in the Pacific than in European theater of WW2, for example. After the Tet Offensive, US units in Vietnam had ratios closer to 6:1 (Lawrence). Trevor Dupuy, a 20th century scholar, gave his own W/K ratios for US wars, which are a bit higher – closer to 4:1 in WW2 and 5:1 in Vietnam.

According to Lawrence and others, 3:1 and below is a very low ratio that is not seen in modern times thanks to body armor and medical advances. But it’s fair to say 8:1 is probably too high of a ratio for the Russia-Ukraine war, which is less like America’s wars in the Middle East and more like Korea or Vietnam. A more reasonable estimate would be 4:1, or 5:1 as numbers from the Donetsk republic seem to suggest.

A 4:1 ratio assumption forms the top blue line on the chart.

Together, these two lines serve as an upper and lower bound for total Russian and allied (mercenary, LNR, DNR) deaths.

As discussed above, these figures are entirely consistent with both Russian/DNR official statements and open source efforts.

The orange and yellow lines represent numbers from NATO military figures. These estimates by NATO vary in quality, but if properly understood and adjusted, match with the other sources discussed above. US and UK sources usually give estimates of “casualties” or “losses”, not specifically deaths. Similar to misunderstandings of Ukraine’s numbers, Western politicians and news sources often misinterpret these words to mean “deaths”. But in military jargon, those two terms include the wounded, missing, or otherwise unable to fight.

How to interpret NATO figures

In terms of their reliability, the NATO figures are all over the place. So much so, that we will have to go through each number individually.

When the war first broke out, most estimates coming from US and UK official sources talked about catastrophic losses for Russia – 5,000 killed in the first two weeks, 11,000 in the first month. These numbers are impossibly high. As Christopher Lawrence explains, 11,000 dead implies losses of 40,000+ out of an initial Russian force of no more than 190,000 troops,  a 25% casualty rate. Such a high rate is contradicted by all evidence on the ground.

The only way to make sense of the 5,000 and 11,000 figure was to take those numbers as losses, applying our W/K ratios to them. They still seem high, but suddenly are much closer to the other sources. The top yellow and bottom orange lines represent 4:1 and 8:1 assumed ratios, respectively.

On April 1, Victoria Nuland said “by our [State Dept] estimates” more than 10,000 Russian troops were dead. Again, this figure is almost nonsensical, unless we take it to include wounded. Nuland is primarily a policy and PR person, so grossly overstating Russian losses costs her nothing and riles up the Radio Free Europe audience.

After a bit of silence from NATO, on June 28, an interesting estimate came out from the Chief of the General Staff of the British Army. It was not widely publicized, and came directly from the military, rather than the UK Defense Ministry or intelligence. They estimated “up to 33,000 Russians dead, wounded, missing or captured”. At a 4:1 ratio, this would imply 6,600 pro-Russian forces killed – very much in line with our other estimates.

Soon after this estimate, however, NATO officials and politicians resumed giving out incomprehensible figures. On July 20, just a few weeks after the British Army’s relatively sober estimate, CIA’s Burns and MI6’s Moore suddenly claimed 15,000 Russians killed. It’s impossible for both numbers to be correct, since it was a relatively quiet period of the war, when Russia was licking its wounds and reorganizing. The British Army figure seems much more reliable, for the reasons given above, and the fact that deception is quite literally in the intel agencies' job descriptions.

In my chart, I attempt to incorporate these data by at least taking the total losses claimed by Burns (15k dead + 45k wounded) and applying a 4:1 W/K ratio instead of an unlikely 3:1. Still, there is a wild jump in the graph, and I wouldn’t regard those numbers as particularly credible.

In August, the DoD under secretary for policy gave a figure of 70,000–80,000 Russian casualties. Around the same time, unnamed US officials said 20,000 Russians were killed in the war. These numbers once again imply the 3:1 wounded-to-killed ratio consistently used by US and UK officials. Again I take the lower bound of 70,000 and adjust to a 4:1 ratio, but it still seems high.

Then UK Defense Secretary Ben Wallace said 25,000 Russians were killed as of September 6 – a number that made even pro-Ukrainian Rob Lee say: “Hmm.” Just a week before, Wallace had put Russian losses at 80,000, implying an absurd 2.2:1 wounded-to-killed ratio.

These high death figures from NATO corresponded with a series of articles in US and UK papers on how Russia was “running out of manpower” (clearly they knew of Russian mobilization plans). The PR ramp-up corresponds with a $17-billion increase in military aid to Ukraine after a late-summer lull.

We didn’t hear of any more figures until November and December, when the number 100,000 was heard twice in reference to Russian casualties. As of December, a US figure of 100,000 dead and wounded is finally starting to match up with Ukrainian estimates of Russian losses.