Google Trends is a hidden gem. It’s a tool provided by Google that allows you to see search trends over time, or compare which search term is more popular. Many people use the tool to compare trending topics or celebrities (Kim Kardashian vs. Taylor Swift, soccer vs American football, burgers vs pizza, etc.)

But I’ve found the tool very useful for uncovering hidden social variables. In this case, I stumbled upon some data that may shed light on the language situation in Ukraine, including how it has changed since the Russian invasion in February.

The Eurovision song contest is held every year in May. The last two years were no exception. In standard Ukrainian, the name of the contest is Євробачення, while in Russian, it’s Евровидение.

The Ukrainian word бачити (“to see”) comes from Polish baczyć (from the same root as Russian очи). The Russian word видеть ultimately comes from the same ancient root as Latin video and visio, which became Franco-English vision.

Language situation before the invasion

The map below compares search volume for the Ukrainian name vs. the Russian name in 2021, on the eve of the war. 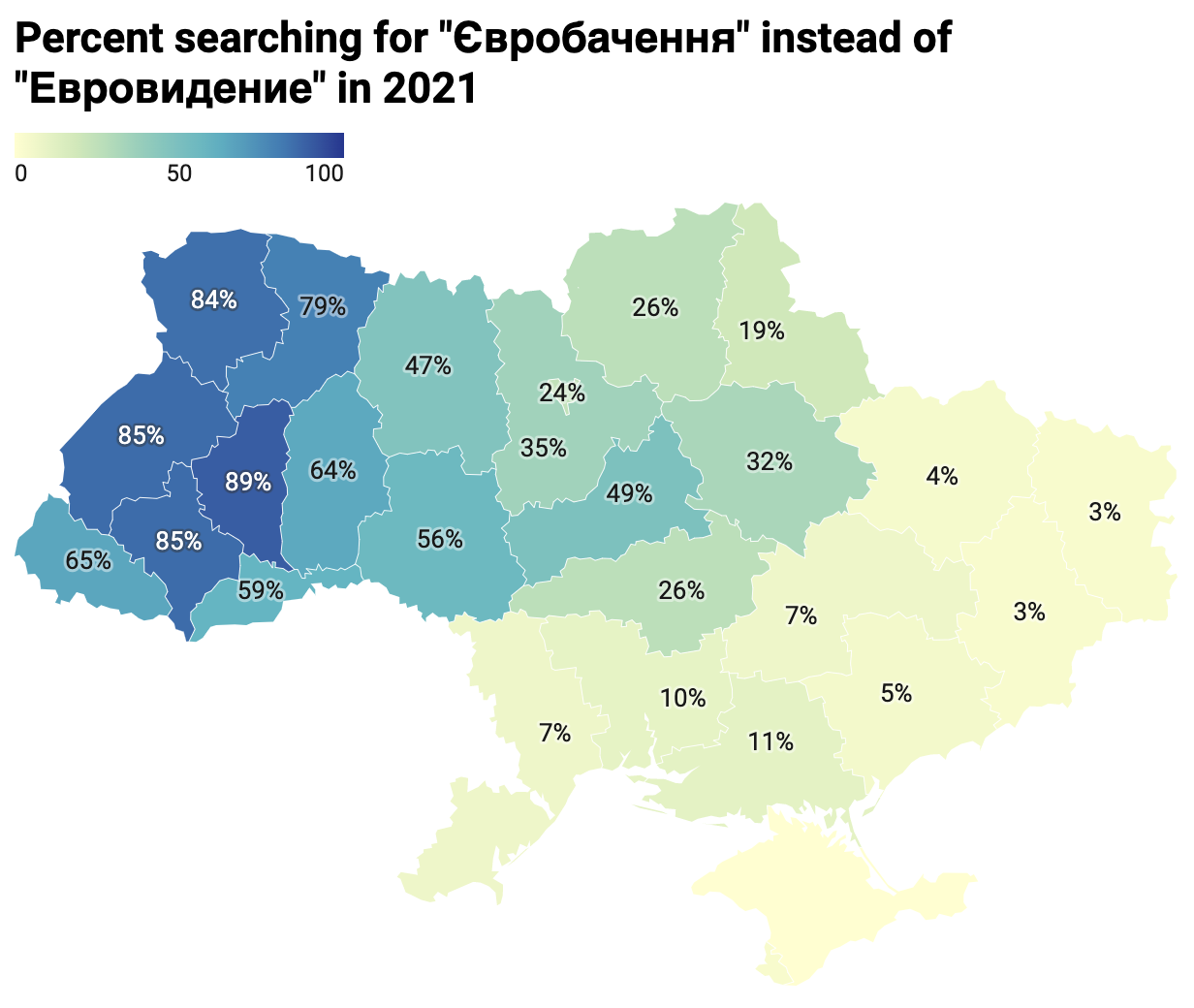 In Ukraine as a whole (including Crimea and Donbas), only 33% of searches for Eurovision 2021 were in Ukrainian.

However, we must remember that Crimea and the Donbas have been outside of Kyiv control since 2014. These areas represent about 15% of Ukraine’s population and are almost entirely Russian speaking. Thus, among territories under Kyiv control in 2021 about 50% of searches for Eurovision were in Russian. This corresponds with the upper bound for opinion polls conducted on Kyiv-controlled Ukrainian territory from 2014-2021. ✅

The Ukrainian spelling predominated in only nine of the country’s regions, all in the west. Even in the capital city, which we now spell Kyiv in English to emphasize the Ukrainian language, only 24% of searches for Eurovision were in Ukrainian.

How does this square with other estimates?

All this may appear to contradict figures, spread by lazy Western sources, stating that only about 25–30% of Ukrainians speak Russian as their main language. These numbers come from the 2001 Ukrainian census, which asked people for their “mother tongue” – many Ukrainian citizens interpreted this in an ethnic sense, and answered Ukrainian, despite using Russian at home and elsewhere. Since they are the last available government figures, they are used by Western sources who are unfamiliar with Ukraine and are too lazy to dig deeper behind the misleading figures.

More sophisticated observers may rely on various polls taken in the 2010s, which indicate that Russian is predominantly used by 30-50% of the country’s population. These are closer to the truth, but are still inaccurate due to social desirability bias – given the aggressive political environment in Ukraine, especially since the annexation of Crimea in 2014, some people feel pressured to downplay their Russian language use. This is enough to skew the opinion polls quite a bit.

Then there is another complication. Anyone who is from Ukraine will see the elephant in the room – the fact that in real life, there is no neat boundary between Russian and Ukrainian. People use a different mix of vocabulary, intonation, accent, and level of formality depending on the situation.

The Eurovision numbers add another important datapoint. 66% of searches for Eurovision 2021 were in Russian. As a sanity check, what about other search terms? We get roughly the same numbers for other comparisons:

All give Russian percentages around 65-75%. Eurovision actually had the lowest percent Russian, probably because its viewers tend to be younger, and younger people in Ukraine are less likely to use Russian.

Changes after the invasion

Eurovision was held again in May 2022, after the Russian invasion that began in February (incidentally, Ukraine won the contest). In some parts of Ukraine, search behavior changed quite a bit. The map below shows the difference in Ukrainian-language searches from 2021 to 2022. 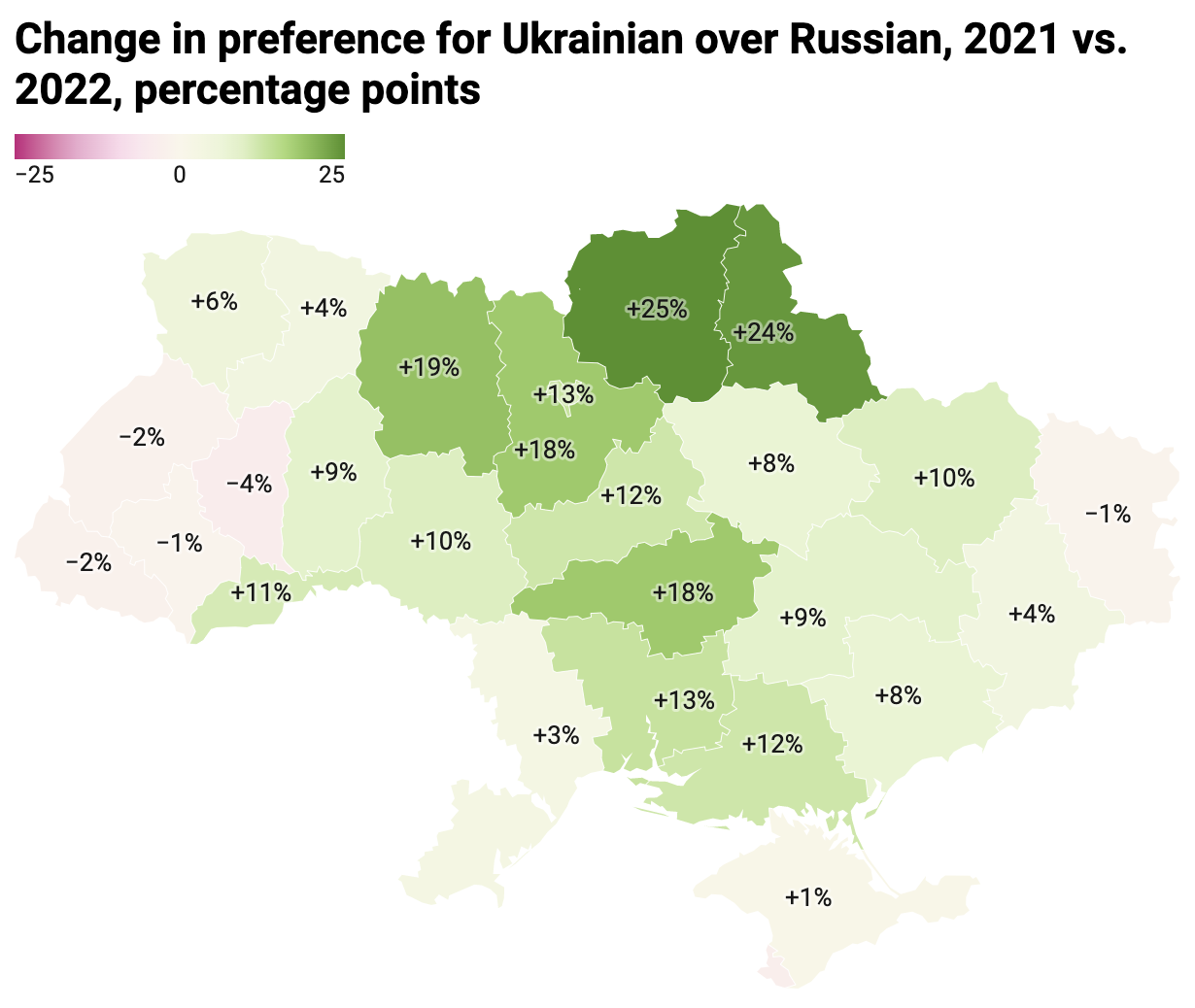 The biggest changes are in Sumy and Chernihiv regions, where preference for Ukrainian jumped by 25 percentage points. Zhytomyr and Kyiv regions also had large gains (19 and 18 points).

In Western regions, where Russian was already rarely spoken, there was no significant change. There was also no major change in areas occupied by Russia, nor in Odessa Region, where Russian seems firmly rooted as the dominant language.

Most regions in central Ukraine saw increases of 10-15 points for Ukrainian searches.

Causes for the shift

But changes in attitudes are not the only factor. Since March, approximately 8 million people have left Kyiv-controlled Ukrainian territories. Most of these people are from areas such as Zaporizhia, Dnipro and Kharkiv – they are largely Russian speakers who are avoiding, among other things, the frenzy of Ukrainian nationalism that has inevitably gone on since the start of the invasion. These 8 million people represent about 24% of the 33 million people who lived in Kyiv-controlled areas just before the invasion. Their departure inevitably increases the relative proportion of Ukrainian users.

Sumy, Chernihiv, Zhytomyr and Kyiv regions are all areas where the Russian army invaded in March, but later retreated. It’s tempting to associate their higher numbers with the retreat of Russian troops.

There can be many explanations for this. One is increased animosity towards Russia after the clashes and fighting that occurred in those regions in March. However, other parts of Ukraine that have had Russian military presence, such as the south of the country, do not show a similar effect.

Another possible explanation is so-called “filtration measures” or other pressure against people perceived as supporting Russia, which Ukrainian military and security forces carry out after recapturing an area (most recently in Kharkiv and Kherson regions). However, I find it hard to imagine that filtration would have such a strong effect. Moreover, Zhytomyr region has a strong effect, despite only small parts of it ever being occupied by Russian troops.

The most likely explanation to me is that these northern regions had a low percentage of people identifying as ethnic Russians, and fluency in Ukrainian was already very high in those areas, unlike southern parts of the country. Therefore, once the invasion began and patriotic feelings swirled, it was very easy for people in these regions to switch to using only Ukrainian, instead of the language mix they used prior to February 2022.